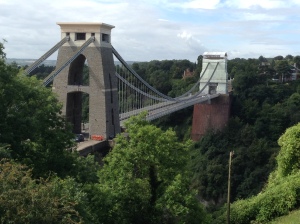 I’ve added a new item to my homepage – photos and information about places I’ve visited. This is because my last few posts have had very little to do with writing and more to do with me being out and about.

A couple of weeks ago I visited Bristol and did all the touristy things like riding around the city on the open topped bus, stopping off at the Clifton

Suspension Bridge and Avon Gorge, both of which are spectacular. The Clifton Bridge, designed by Isambard Kingdom Brunel (with such a name he had to build spectacular bridges) wasn’t completed in his lifetime, but finds were raised to complete it as a memorial to his achievements. 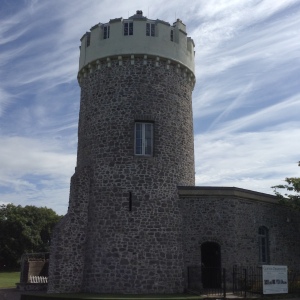 Whilst there, I walked up the hill to visit the Clifton Observatory which has a Camera Obscura, giving views over the gorge and towards Bristol. The website says it is one of two camera obscuras open to the public in England. I’ve been trying to find out where the other one might be and think it could be in Eastbourne. Please contact me if you know.

Once you have climbed the steps up to the top of Clifton Observatory you can descend down steep steps, through an underground passage, to Ghyston’s Cave which gives spectacular views of the bridge and the Avon Gorge.

There is a small outdoor cafe in the observatory, run by a French family from Toulouse. There I had a piece of Spanish Polenta cake made with peaches; it was delicious. They have no toilets, but the public ones are down the slope just as you approach the Suspension Bridge.

During the day, another fun way to travel around the waterways in Bristol is on the Community Ferry Boats.

Finally, I went for a taster session with Bristol Nordic Walking. This is a link to their homepage as they explain the benefits of Nordic Walking far better than I can. All I can say is that it was tremendous fun and if there was a similar centre in Kent I’d be there.

2 thoughts on “Doing the touristy thing in Bristol”